Norfolk is viewed by many as the UK’s bird watching capital, and it’s not hard to see why.  From the variety of habitats (salt marsh, woodland, heathland, and fresh water) to the sheer numbers of different species and size of aggregations, it does take some beating.

Oaktree Cottage is well located to take advantage of all of these habitats, with all kinds easily accessible within half an hour’s drive, and most much, much closer.

For ornithologists of all levels of interest and commitment, the many reserves take some beating – especially if the weather is less than ideal for sitting out in the open.  The closest reserve is Pensthorpe (less than 9 miles by road) which has been home to BBC’s Springwatch for the last three years, and has a number of hides (several heated).  Species spotted at Pensthorpe include Little Ringed Plover, Sandmartin, and Marsh Harrier, Avocet, Redshank, Greenshank, Lapwing and Bittern, as well as a wealth of warbler species and other Summer migrants.
As well as the wetland habitat, Pensthorpe also has a cafe, shop, gardens, nature trails (taking in the red squirrel habitat), and a busy programme of events.

The Norfolk Wildlife Trust visitor centre on the coast road in Cley (less than 9 miles in the other direction) is in the centre of the north coast salt marsh habitat.  The centre includes a cafe, interpretation centre, viewing area (including views from cameras on the marsh), and provides stunning views out across the marsh.  The Cley marshes reserve is also the oldest nature reserve in the country. 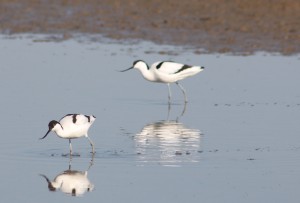 There are further reserves throughout the area…

If you are a hardened bird watcher and are happy to watch from the open, then there are countless opportunities along the coast, and Broads, as well as in some truly ancient woodland.  Foxlex Wood (just under 20 miles by road) is believed to be 6000 years old, and is the largest ancient wood in Norfolk.

For heathland habitats, you can again take your pick around the Weybourne to Salthouse area (broadly known as Kelling Heath).

The Fat Birder provides some more advice on other top Norfolk bird-watching spots.