There are plenty of country estates and gardens within half an hour of Oaktree Cottage.  A few of the highlights are listed below, but there are plenty more to choose from!

Blickling Hall (8 miles)
Blickling Hall is one of the finest Jacobean houses in the country.  There has been a house on this site since at least the 11th century when the manor house was owned by Harold Godwinson, better known as King Harold II. 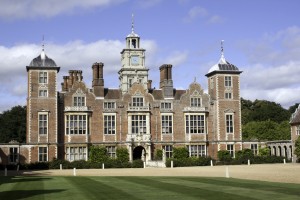 In the 15th century the house was owned by the Boleyn family, and some claim that Anne Boleyn was born there, while others believe that her birth place is more likely to have been Hever Castle in Kent. 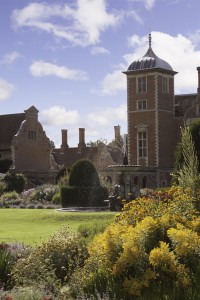 Blickling Hall from the Gardens

The current house dates to 1619, when Sir Henry Hobart (whose family lived in the house until 1940) employed Robert Lyminge (the architect who also designed Hatfield House) to redesign the house.
1940 marked the end of the use of the hall as a private residence, when it was used to
accommodate the staff of RAF Oulton.  There is now a museum dedicated to this period of use in the old tack room.
Visitors today can enjoy the house, fantastic gardens (dating back 300 years) and extensive park land.  You can also hire cycles (or bring your own) to explore the full extent of the grounds, or play croquet on the lawn in front of the house.  Allow at least 2 hours for a swift look around the house and gardens, or spend the whole day if you want to explore the full extent of the parkland.
The park also hosts a number of concerts throughout the year with artists such as Katherine Jenkins, Madness, and Roger Daltrey appearing in the 2011 season.

Felbrigg Hall (12 miles)
Felbrigg Hall is another 17th century house, with very little alteration since the later part of the 17th century.  Comparing photographs of the front (Jacobean) and side (Classical), you could be forgiven for thinking that they are completely separate houses, so much had the style of architecture moved on in just 70 years. 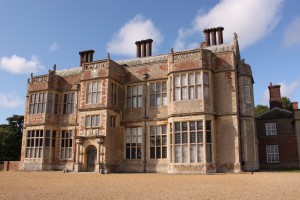 The front of the house today shows how a variety of building materials was used, including reclaimed stone from an earlier house, and local flint.  Although it looks rather scruffy today, the walls would have originally been faced with plaster which would then have had a fake brickwork pattern painted onto it.
The interiors are also remarkably well preserved, including 200 year old wall-paper, Jacobean ceilings, and extensive Georgian detailing.  Other interesting exhibits include the period fire engine, which was purchased by the hall after an explosion in the firework shop – with firework-making having been a most respectable hobby for the gentry of the 18th century.
Felbrigg also has a walled garden, formal garden, and extensive woodland to explore.

Holkham Hall (15 miles)
Holkham Hall, built in the 18th century by the Coke family (still in residence), is one of the finest Palladian houses in Britain, and was designed to echo the style of a Roman palace.
The building cost of £90,000 nearly caused financial ruin to the family in the late 18th century, which meant that they could not afford to remodel the house to match the changing architectural tastes of the following years.  While this may have embarrassed family pride at the time, it means that the hall is now preserved (inside and out) almost as it was at completion in 1764.
As well as the hall itself, the estate also contains a bygone museum, boat trips on the lake, and one of the best beaches in the country (featured in the closing scenes of Shakespeare in Love).

Sandringham Palace(23 miles)
Sandringham House has been a royal residence since 1863 when Edward IV made it his home.  However, the current palace dates from 1870.
The palace is much more homely than might be expected, whilst still maintaining an impressive sense of grandeur.
Sandringham also houses a significant clock collection, and until 1936 all the clocks on the estate were, rather quirkily, set to ‘Sandringham time’ – which was 30 minutes ahead of GMT.
Allow at least 4 hours to explore the house and estate.
The flower show (last week in July) has now been running for more than 130 years, and makes a spectacular day out for garden lovers.

Stody Gardens (less than a mile)
Stody Gardens are closed to the public for most of the year, but are opened every Sunday in May for charity, as part of the National Garden Scheme.  The gardens cover 10 acres, and are planted with more than 100 varieties of azalea and rhododendron.  Across the road is a Japanese water garden which is also surrounded by literally thousands of azaleas.

Sheringham Park (8 miles)
Sheringham Park is an expansive woodland garden extending from well above Upper Sheringham down to the coastal plain.  In the spring, the rhododendrons (best viewed from the elevated viewing platforms) steal the show, but there is plenty of interest throughout the year.  As you get to the lower part of the gardens, the woodland opens up to provide views of the house (not open to the public) and the coast.  The temple (a folly contemporary with the house) is a great spot to enjoy the views.  Behind the house, on the edge of the woods, the ‘gazebo’ is a tower on the hillside just peeping through the tree tops.  This is well worth the climb for the extensive view along the coast. 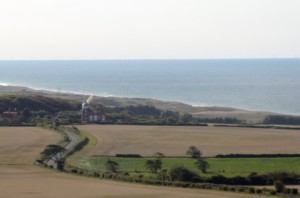 View of the Coast from Sheringham Park